Skip to content
Home
Management
Use Evernote as a document library

Use Evernote as a document library

Use Evernote as a document library when focusing on or researching a domain. Such an investigation requires lots of information, documents and references to sites. Evernote is useful as a business memory as you can store material and links easily but also comment on it.

Evernote is great for pouring out thoughts, mind-dumping, you can tag an item and file it away for a rainy day.

We are used to URLs now on the internet, but Evernote provides that function on your desktop. You can refer to a piece of work or a document by a URL within Evernote. Indeed it is even shareable publicly. So this is a great boon. You can only do that in Windows Explorer by creating file://links.

Linking documents together builds valuable references. Your files are no longer isolated.

1 – Add an ‘In link’ to reference a note in another.
2 – Use a reference link to include a useful source of background information.
3 – The standard inline link, referring to another note as part of a text.

What makes Evernote interesting is the ability to tag which gives you an additional dimension with which to work. A vertical one from notebooks (like windows folders) and a horizontal one, which you don’t have with files.

Evernote as a Document Library

Google desktop was a fantastic product that indexed the local machine and provided a search box on a navigator to search by keyword just as we now do on the web. But they stopped it – why o why? Perhaps to incite people to put documents on the internet.

But having discovered that and having it so cruelly taken away, I searched for a replacement that would allow me to index my stored documents in a library and I found Evernote. It’s something Microsoft should build into their OS!

Evernote is on all platforms – phone, tablet, desktop and Mac.

Evernote combined with other services

A few excellent connectors to Evernote have died, notably Carddesk and moh.io. It is unclear why they were unable to find a stable business model. Organisation tool Ayoa survives in its own right and connects to Evernote, Nozbe too.

My experience of Gneo, organising tasks as an Eisenhower grid is of great potential but unfortunately not sufficiently stable technically.

A publishing platform with postach.io

Publish from your Evernote document library.
One is with postach.io, a blogging platform which allows you to create a blog directly from Evernote.
Second is the shareable link. Once you share a note, it has a public URL to which you can refer anywhere on the web.

Evernote was much more when moh.io was around; it allowed you to connect notes visually and tag notes by dragging. Extremely useful to combine quickly notes into domains, organise notes, collect subjects. Evernote should buy it themselves.

A note can then be opened directly from there.

Use Evernote as your document library for everything small or large. 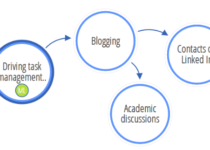